How to Hack a Urinal 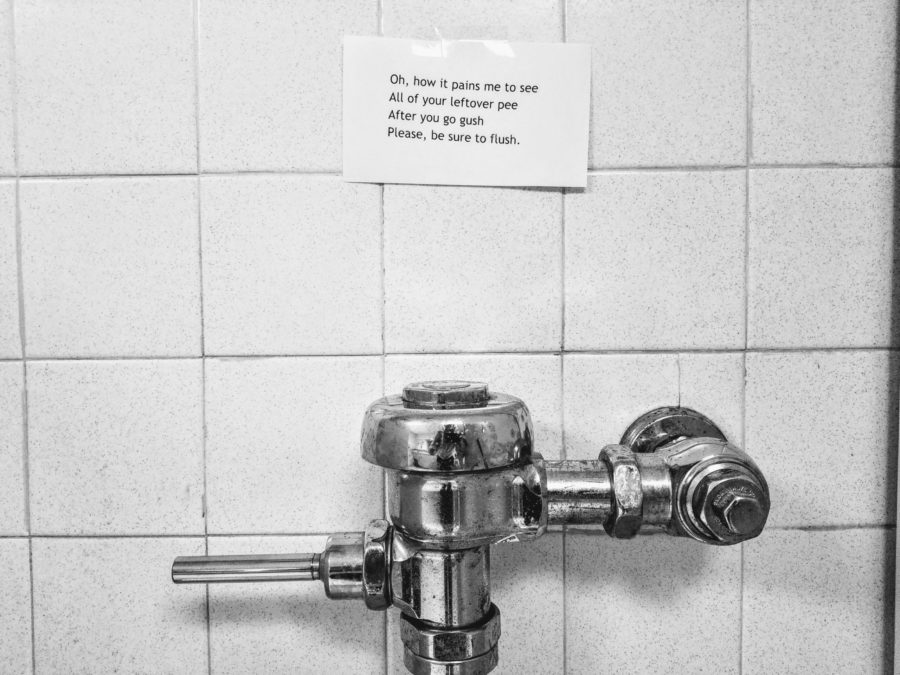 What started as a passing complaint has now blossomed into a reflective lesson. If you seek a change in your world, your environment, it is worth a try to change it. Even if it is something silly and inconsequential, like a faceless non-flusher, the least you can do is try, because you never know, it might just work and affect other people.

In short, and trying not to be too graphic, someone in the communal men’s room of our office building was refusing or forgetting to flush one of the urinals. This was a continual topic of conversation as, at first, we thought it was one of our own. However, everyone declared that they were not the culprit and we were all disgusted by it. What’s funny was it was always the same one, the one on the right. 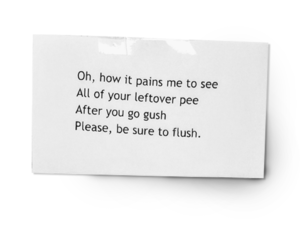 This is a building of adult professionals, and some of them apparently think they don’t need to simply reach up and flush the urinal when they are done. We are all for conservation and saving water, but this is a pretty simple lesson you learn when you’re three years young. No one wants to see what you made in the potty, so when you’re done, flush it down. But, this repeat offender didn’t get the mental memo.

One day, our copywriter must’ve had enough. He took action by writing and printing a silly poem addressed to the bathroom bandit. He cut it down to size and taped it right over the scene of the daily crime. This small act of rhyming rebellion was fun at first, but it worked. The very next day, with each bathroom visit, the urinal was clear. And the next day was the same.

Assuming a modicum of intelligence and civility by flushing after using, this shouldn’t be difficult. Haphazard urinal usage can have devastating consequences. Not only is it gross, but bathroom behavior and etiquette can affect your professional reputation.

It has been months and the sign is still there. There is no more pee left in the urinal. We assumed the cleaning people are probably pretty happy with the sign and its result. It is only held up by Scotch tape. Anyone can take it down, and yet it still stands, like a beacon of hope, however absurd and juvenile.

The best part is we’ve overheard other business leaders in our building mentioning it. Not only did this fatuous initiative solve our problem, the team tasked with cleaning the place leaves it up. It’s fair to say flushing benefits everyone, regardless of gender or class. A poem in a bathroom proves small wins can power successful habit changes.