The Ups and Downs of Standing Desks 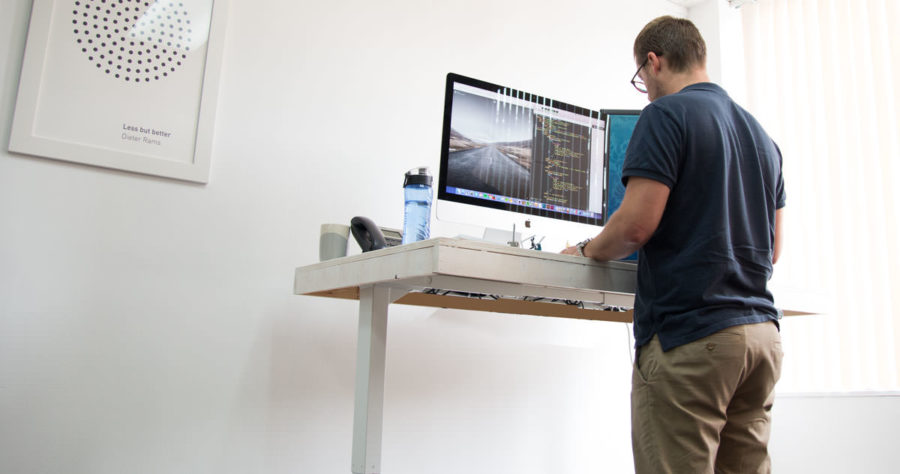 Our first 30 days behind adjustable desks.

We are taking a stand. Literally. Along with moving offices, we also upgraded our desks to adjustable, standing desks from UPLIFT. Here is a detailed diary of our first 30 days using the new standing desks.

Everyone likes to get mail, especially packages. It’s like a midweek Christmas in April. Well, this happened to us when the mailman huffed and heaved three 60lb boxes through the narrow door of our now old office, stacking them behind. Like a Festivus miracle, our new desk frames had arrived!

After moving, we ripped the desks out of their boxes, and planned to assemble them, simply slapping our current desktops on to the new mechanical legs. Little did we know, our desks tops were too shallow, which presented a problem. Never fear, Adam, is a crafty craftsman and he was excited to construct some new desktops. That night, he banged out the desks tops and we were good to go. This morning, we were all so excited to get to standing that we put together our new standing desk frames right away. Busting out the allen wrenches and pliers, we tackled the construction with verve. The first desk took 50 minutes to build and the subsequent desks about 35. If you have a powered drill, get a hex-bit adaptor for it and it will go together much easier.

Now built, we were excited for our new toys. We wanted to stand, and stand we did. Our first day was like attending a Bon Jovi concert, you didn’t want to sit down, it was exciting, tiring, and ultimately a great experience. We realized that just the option to stand is a freeing feeling.

The desks are so quiet. They go up and down, and down and up, with the soft purr of a cute kitten. We have come to enjoy the sound of each other’s desks going down or up. Standing desks lend themselves more to dancing, stretching and exercising. We are listening to The Black Keys right now, jogging in place, two stepping and shaking our rumps while standing at our desks.

Day 6 Thinking Outside the Desks

Coming into work today, we were all beyond happy to stand. It was as if we had accepted an invisible, unspoken challenge to stand as long as we could. We all had our own maneuvers and minor exercises to get through the standing day. Ryan did these weird inadvertent lunges, hands on his hips. Ron kicked and danced and stretched his way through ache. Adam shuffled his feet most of the time, standing like a magician revealing his grand finale or crossing his heels like matador bravely avoiding the bull’s horns.

Ron and Ryan invented a new, backwards, no-look, foot high five, and made it to noon, standing the whole time. The transition is exciting and rewarding, but tough. By noon, the heels of our feet were begging for forgiveness.

Did you know that standing desks reduce the risks of metabolic diseases such as diabetes, as well as obesity and cancer. No one wants cancer, so thank you, standing desks, but for now, our knees are feeling older than the rest of our body.

Backs are a lot sore and heels are a lot tender, but all of us really love starting half the work day standing strong. There is a mental signal that unlocks when you know you are not confined to a chair for eight hours, or hunched over a low desk like an ape. Coming to work has a different feeling to it, like heading to the gym and knowing that while you have a tedious task ahead, but you will feel better for it.

After a long-legged week, we came up with a regular workday workout routine while standing at our desks. Every morning, before 10am, we each do our own calisthenics to get the the blood pumping, the creative juices flowing. Ryan sways like Patrick Swayze. Ron does some form of Israeli whatever it is that Ron does. Adam continues to shuffle his feet, essentially an office tapdance. Even on day 12, standing desk take some getting used to, and that is why we try to stay active while standing. We are conditioned to sit and slouch; evolution has positioned us this way, but it is up to us change this pattern.

When gathering around someone’s desk to discuss a particular project, the elevated desk just makes so much more sense. No longer do we have to crouch, slouch or awkwardly kneel and peer at someone else’s computer while discussing work. Now, we simply raise the desk and gather round in a group dance to observe what the other person is working on. The fact that we can all stand around and brainstorm at the same level is remarkable.

Day 14 Half a Month, After Lunch

That 1 o’clock slump is a real thing in the work world, especially after a heavy lunch. It is easier to sit and space out after such a meal, but here at AR Design, we find it a refreshing test to raise the desk and stand for a better part of the afternoon. Turns out, standing, along with some good tunes, is like walking off the carbs and calories, giving us a second wind.

Something about standing makes your mind sharper, your fingers faster, and your creativity come quicker. Ryan banged out some killer copy, Adam designed some perfect proofs, and Ron had ten cups of coffee, did ten pushups, and then programmed the hell out of a dev site. We aren’t scientists, but something about standing seems to lend itself to productivity.

Day 16 Proof is in the Pudding

Upon researching the benefits of standing more throughout the day, we keep landing on this line that says ‘Sitting is the new Smoking’. Certain studies show that sitting far too long can shorten your life. Well, I am glad we have the option to stand. Also, now we can eat pudding without using our hands.

As clients, new and old, came pouring into the office today, it was a relieving new standard to be standing confidently at our UPLIFT Desks as each one or two came through the door. There is something about eye-level that suggests a soldier’s reliability. In the design world, you want to exude confidence as well as receive it. The desks provide us a great opportunity to chat about something other than business and a way to keep business meetings more casual. We think the clients got a kick out of them.

Ron and Ryan agreed that their standing is becoming less in the last two days. The unspoken challenge is gone. However, they have declared that they will at least try to stand between 3 and 4 hours a day. Whereas, Adam is still riding high. Every good, healthy thing takes a little getting used to, and a slump is expected.

Today was Adam’s day to take a seat for most of the workday. The boss, however, has an excuse to enjoy his throne. His wife had a new baby last week, and he has been a champ ever since. We all agreed that the less you think about it, the more you just stand and work. This harkens back to the more productivity thing we talked about.

You know you have a good gig when you actually (and honestly) look forward to work. The desks make coming back to work after the weekend less daunting. Standing half the day is a great way to start the week and then endure. By Wednesday, we will be dancing while designing.

When we tell respective friends and other colleagues about our standing desks it elicits a response of curiosity each time, and sometimes jealousy. Everyone wants to know our first hand experiences. While the standing desk is often talked about few have made the transition and we are proud to share our stories. These desks literally raise the game; our wives want them for their work and home.

We miss the desks! It’s weird now to try to get a little work done over the weekend while at a normal low desk that does not move. We imagine it is like television before and after the remote control was invented. A better metaphor might be a life before and after having kids. But we can’t remember our lives before our rising desks.

Day 30 Some Kind of Anniversary

Switching to standing desks has had a profound impact on everyone in the company. It has been only 30 days, but the difference runs deep. From creative positivity to form, function and posture, it is safe to say that, as a company, we are fans of the desks and the choices they provide. We are programmers, designers, developers, writers, etc, and the universal agreement is that we are a happier (not to mention healthier) bunch. Not a day has gone by in which we don’t dance, or do some weird exercise at our desks.

The Option to Stand

From better back support, to limb circulation, and general health, standing desks are ideal. No longer are we the last man standing. Just the option to stand and stretch one’s legs is such a simple luxury that makes us feel good in the morning or brand new after a heavy lunch. No longer will jambalaya make our afternoons lethargic. We are now stalwarts of the standing desks.